Unbelief turned to Belief by Belief

Each crusade, while much the same in operation, creates unique stories, and our most recent crusade to Lázaro Cardenas, Michoacán proved no different! 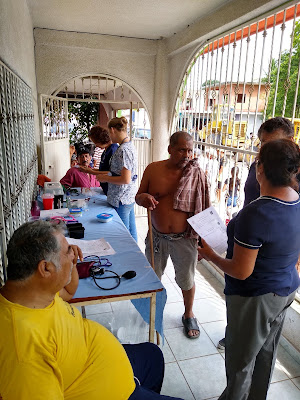 These two men, friends or family members, arrived at the crusade after dinner.  The patient, in the yellow shirt, could not walk on his own and required, not only the use of his cane and of his friend, but of several of our crusade volunteers, also, just to move from registration, to vital signs to the doctor.  He was heaving and out of breath and spoke only when necessary.  I must admit my lack of faith.  When I saw them, I actually thought: “These men are never going to accept Jesus.”  (Even us missionaries have LOTS of room for growth!)  Their faces, etched with hardness and anger, never cracked a smile.

As with each of our patients, after their medical appointment had finished and while waiting for their prescription to be filled, the pair spent some time with one of our evangelistic counselors, Aurelia.  I saw them sitting there and thought, once again:  “I really don’t think they are going to accept Jesus.”

Then, an additional obstacle, besides what I believed to be already hard hearts, presented itself.  A vehicle was blocking the entrance to the church and needed to be moved.  So, our crusade director, Adrian, and I began to search among the patients for the owner of the car.  Any hope for these men’s salvation dissipated when I saw that Adrian had identified the man with the yellow shirt’s friend as the driver for whom we had been searching.  He got up from the evangelism area and went to move his car.  Despite my struggle to believe, I followed him out, just to make sure that he would come all the way back to where Aurelia had been sharing the Gospel with them. 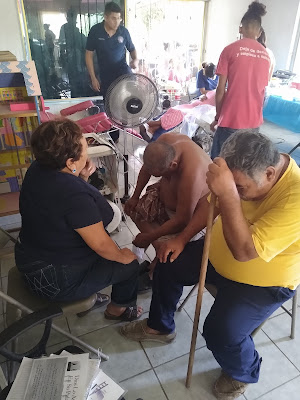 Once he was seated again, I moved on to other activities.  Several minutes later, as I walked through the room, I glanced and saw that BOTH men had their eyes closed and heads bowed and were praying to accept Jesus as their Lord and Savior.  I quickly snapped the picture, to which a local lady observing nearby commented, “Don’t break your camera taking THEIR picture.”  My faith had now grown and I responded:  “As long as they go to Heaven, my camera breaking would be well worth it.”

The following afternoon, I saw a man arrive at the crusade location.  I literally did a double take!  It was the same yellow shirt patient as the day before!  The same man, but yet a whole new man!  He was in clean clothes, walking only with his cane, unaccompanied, a huge smile on his face radiated as he greeted everybody he walked by.

My soul rejoiced, my unbelief found repentance, my faith was strengthened and I knew that I had a new brother in Christ!


My unbelief, was turned to belief by the belief of these men!

Each crusade, while much the same in operation, creates unique stories, eternal stories, and our most recent crusade to Lázaro Cardenas, Michoacán proved no different!  Praise the Lord!