Life happening has prevented me from writing about life happening!  And there is a lot of life happening with 18 kids around!  Gabriel, a family friend of ours and the person who produces our Fishers of Men promotional DVD's, was at the house the other day working on a new DVD.  I caught him kind of just standing there and gave him a quizzical look.  He responded:  "This place is just so real."  Yeah, that would be one way to describe Refuge Ranch...."real".  There are real successes, real failures, real hugs and real fights and, last week, even real accidents!

Last Friday one of the kids called me out of school because Martha was in her room crying and holding her head!  I went to see her and she just kept repeating, "My head hurts", but could give no explanation as to what had happened or even how she had gotten to her bedroom!

I went back downstairs and started asking around until one of the other kids informed me that the phone had rang and that, after several rings, Martha and Martita had both ran to answer it.  (Up to this day, I don't know who called!)  However, they collided on their way to the phone and Martha fell and hit her head on our cement floor!  Since she had gotten up right away and gone to her room, everybody around assumed that she was OK.  Well, a half an hour later she could not remember what had happened (although she knew who we were, the day, her own name, etc.).  Worst yet she would ask me, "Mom, why does my head hurt?"  I would explain what had happened and no more than a minute later she would ask the same question again!  This happened over and over in less than five minutes and I realized that she was not retaining any new information!  I thought:  "This could make school a little difficult!"

A few minutes later Victor pulled up from running errands.  After informing him of the latest happenings, we decided to take Martha to the nearest private hospital, about 25 minutes away, to have her checked out.  After x-rays that threw out any possibility of a skull fracture, and an IV for inflammation and pain, Martha seemed to perk up and we were released from the emergency room.  However, by the time we got home 30 minutes later, Martha was crying again and was still confused and unable to retain any new information.  So, we called Dr. Escamilla, our lead doctor on the Evangelistic Medical Mission Crusade volunteer team and a retired military doctor.  He, in turn, contacted a medical school friend of his who is a neurosurgeon.

Enter the next piece of the puzzle, "our" volcano, Popocatepetl, has been very active for the last two weeks and the level of alert has gone up one level.  (We call it "our" volcano because it dominates the eastern horizon at Refuge Ranch and is framed by all of our eastern windows.)  So, Victor did not feel comfortable leaving the rest of the kids at home with Adrian and Vero while he and I traveled nearly 3 hours to the north side of Mexico City to see the neurologist with Martha.  I didn't feel right about having Martha go to the doctor with Adrian and Vero, but without a parent.  The solution?  Victor stayed home with the kids and I went to the hospital with Adrian, Vero and Martha. 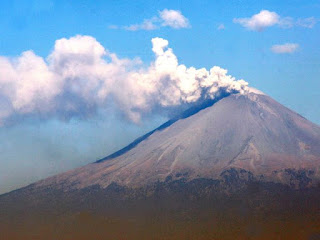 The Popo from a news photo.  This view is from the opposite side as Refuge Ranch.  Here you can see the crater, which is not visible from our side. 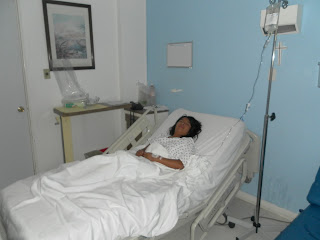 Martha in the hospital.

After a thorough external neurological exam, the doctor decided to admit Martha to the hospital for observation.  I was so glad that I had gone with her and felt much relieved that if her condition changed during the night there were people around to help out!  After more IV's and some rest, she seemed quite a bit better the next morning and was released around noon.  We finally got home around 6 p.m. to a volcano that had never exploded (thank the Lord!) and a family anxious to have Martha back! 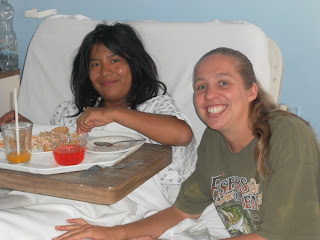 Both of us happy right before Martha was released from the hospital.

Today, Thursday, she finally seems back to normal...not sleeping so much, not forgetting things and having a good laugh every time the phone rings and we yell: "Martha, don't run to the phone!"  The Bible promises: "that in all things God works for the good of those who love him, who have been called according to his purpose." (Romans 8:28) and this situation has proven no different.

When Martha first joined our family, she had a noticeable lack of strength and control over the right side of her body.  With exercises at home, given to us by an orthopedic physician, the condition has improved quite a bit.  However, when the neurologist examined her he, of course, noticed the deficiency on her right side.  So, he has asked us to have an electroencephalogram (EEG) done in the next few weeks for him to check out and see if he can determine what caused her condition and if anything can be done to improve her coordination and motor skills.

We are so thankful to now have a neurologist whom we can trust to dig into Martha's situation and see how we can more effectively help her to be all that God wants her to be!  We praise the Lord for His graceful protection and that her fall did not lead to anymore complications.  We continue to ask for your prayers as she could still experience effects from the fall for up to 6-10 weeks.

I have shared on other occasions about health care in Mexico:  the lack of its availability and quality.  Government hospitals are infamous for having a lack of equipment, lack of staff and for making people wait for hours, even in serious medical situations!  Therefore, our family uses private doctors and hospitals.  However, in order to be seen at a private hospital you have to walk in with money in cash, in hand.  In order for Martha to be seen at the second hospital, I had to lay out nearly $500 dollars upfront, just for her to be attended to!

The most feasible "health insurance" for our family is a separate bank account that we have set up as an emergency medical account, with the goal of having $1000 always in that account and available in the event of a medical emergency.  The day we went to the hospital with Martha, that account had only $365.00 dollars in it, due to past medical expenses.  Martha's medical care this past weekend totaled $675.00.

Therefore, I would like to share three immediate financial needs that our family and ministry has in the medical area:
If the Lord leads you to give towards any of these needs, you may send your tax-deductible contribution to:

Or you can choose to go directly to our website: fishersofmenmexico.org to donate directly on-line! 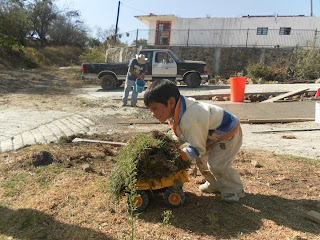 Three year old David trying to push his loaded dump truck!
Posted by Fishers of Men at 2:26 PM No comments: