On Sunday, October 20, 2013, Danny would have turned 6 years old. Ironically, that day was also the six week anniversary of Danny's Heavenly birthday, his going to be with Jesus.

On the way home from church, we stopped at the cemetery and placed some new flowers on Danny's grave. The two times I have visited the cemetery since Danny's passing I have been overwhelmed by a tremendous desire to tend to his grave. As if by raking off the leaves and removing the dead flowers and placing new ones I am somehow caring for him. A mother's love and instinct certainly do not extinguish even when the breathe of life does. I suddenly can identify much more strongly with the women who visited Jesus' tomb that marvelous Sunday morning! Oh, how I wish that the outcome would be the same...that Danny would run up with his hobbly run to ask for whom I am looking! One day that will be! 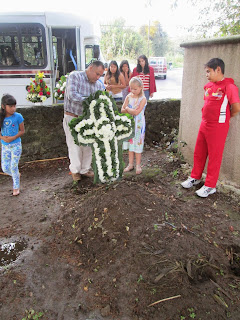 Danny's birthday and the visit to the cemetery was an extra special day because Ashleigh Weis was visiting for a week from Ohio. Ashleigh lived and ministered at Refuge Ranch for two years several years ago and had loved Danny just as we do. It was beautifully painful to share Danny's new resting place with her. 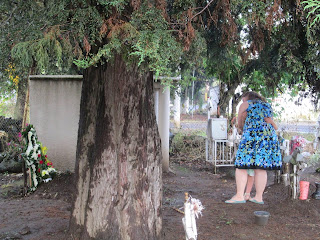 Ashleigh and Ruth comforting each other.
Ashleigh y Ruth consolándose.

An unexpected result from the cemetery birthday party was the very vivid reminder of the losses our children have suffered before we had the privilege of parenting them. We took the opportunity to accompany Jocelin as she laid flowers on her mother's, Aunt Pati's, grave. Pati, Victor's older sister and Jocelin's mother, has been gone for four years now. Watching the grief on her face, in addition to the grief etched there by Danny's passing, reminded me that she has also lost her father, that we have three other daughters who have lost their mothers and five other children who have lost a biological sibling before joining our family. Wow! I wasn't there to help them in those moments that changed their lives forever, but now Victor and I have the great privilege, responsibility and challenge of continuing to help them heal through Danny's passing and their many other griefs. 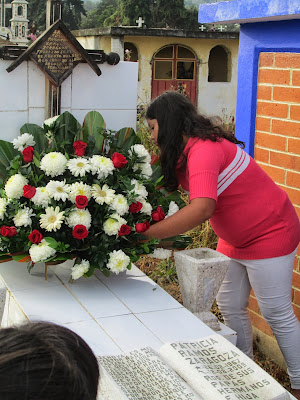 Happy Birthday, Danny! We know it was the best birthday you have ever had...it was certainly a different birthday for us!

Periodically I will be sharing snapshots, in pictures and words, of how our family is dealing with the grief of having had to say goodbye to Danny here on earth.

Every Friday after school our kids visit the merit store and purchase different fun items with the merits they have earned during the week. Yesterday, Ana showed me what she had purchased...a Spiderman washcloth scrunched into a little cube that expands when placed in water. I thought her purchase to be a bit strange for a girl, but if that's what she wanted, fine with me! Well, last night I went into Danny and David's bedroom to get David's pajamas (David still isn't sleeping in his room yet) and, on the floor, stretched out, was Danny's Spiderman sweatshirt, one of his favorites, stretched out next to, you guessed it, the Spiderman washcloth Ana had purchased. She had bought the washcloth for Danny, with her own hardearned merits, gone to Danny's room, found his favorite Spiderman sweatshirt and arranged them together on his floor. Wow! I didn't say anything to her and she didn't tell me about it. This was part of her grief process, and became a part of mine. 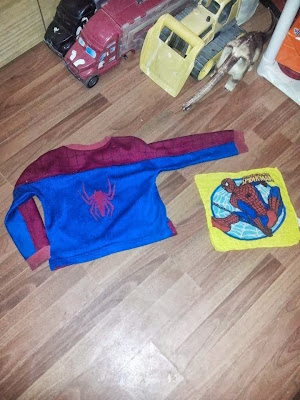 Victor and the crusade team pulled out around 8:00 a.m. a week ago this past Sunday morning here from Refuge Ranch on their way to an Evangelistic Medical Mission Crusade in the Acapulco area.

(In fact, they are on their way back home today.  I started writing this blog the day they left and figured I better post it before they are actually home again!  I love writing, but due to Danny's death, and Victor being gone on crusade for 10 days, which leaves me totally in charge here at home, this blog has, I believe, broken a record for taking so long to write!)

This crusade had already been previously scheduled, but recently metamorphosed into a disaster relief crusade. 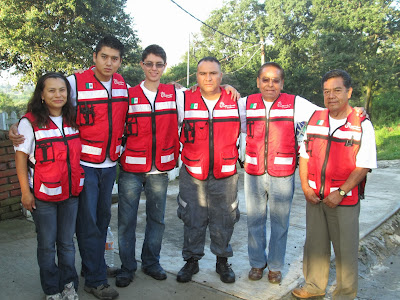 Victor and some of the EMMC leaders and volunteers with their new,
lightweight disaster relief t-shirts and vests. 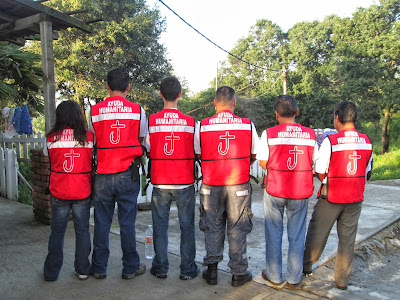 We purchased the vests and t-shirts and then did all of the
silkscreening and iron-ons ourselves in order to save money.

A little over three weeks ago tropical storm Manuel dumped torrential rains on the state of Guerrero (at the same time as Hurricane Ingrid hit Mexico's east coasts, causing severe flooding in many other eastern and central states). These rains caused rivers and lagoons to pour over into local communities, even totally flooding out the Acapulco International Airport. During one of the national news reports, the reporter floated through the airport terminal in a small motor boat! 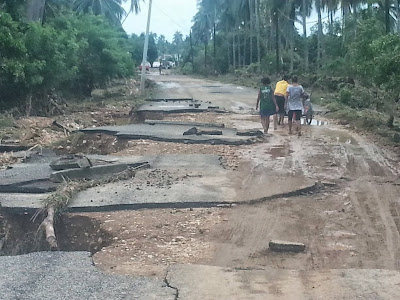 Damage to the local village streets.  This picture, and the next,
were taken by one of the local Christians and one of our best friends.

While the main tourist drag through Acapulco was barely affected, many of the impoverished communities where Fishers of Men has been working this year through the partnership with the Guerrero Baptist Association and the Baptist General Convention of Oklahoma were totally covered with water and layers of mud. 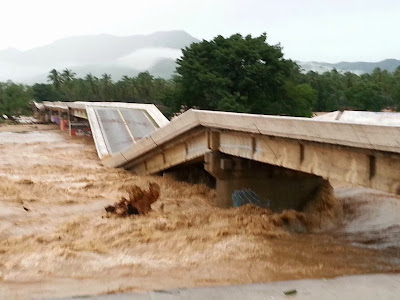 One of the collapsed bridges 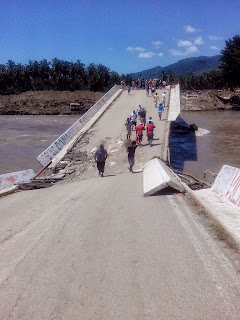 People walking across that same bridge when our
team arrived in Guerrero on Sunday, September 29.

So, Victor upped efforts to take to Acapulco the relief needed. The team left for Guerrero with four vehicles: the fifteen passenger van, two pick up trucks packed to capacity and a borrowed 3 1/2 ton truck with donated items, such as clothing, imperishable food items and personal hygiene items, with plans to meet up with a fifth truck coming from another city on the way. 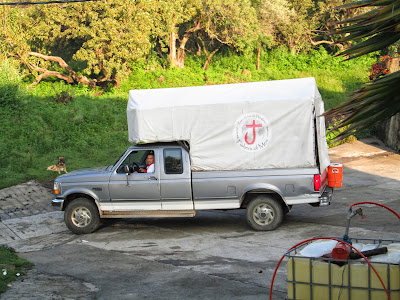 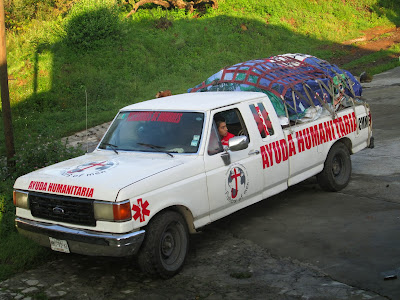 Adrian driving one of the Fishers of Men trucks loaded down. 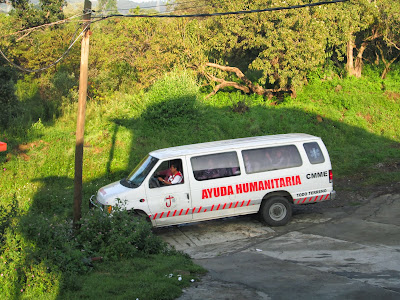 Brother Max heading out with the fifteen passenger van with some of the volunteers. 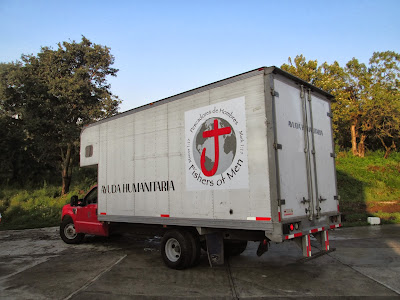 The borrowed 3 ½ ton truck full of donated items for the flood victims. 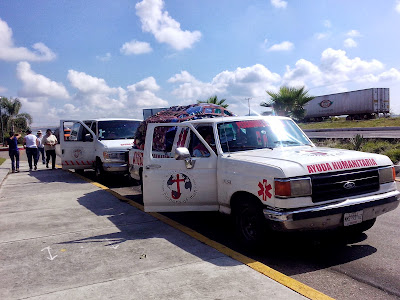 Besides the additional supplies, volunteers and financial resources dedicated to these relief efforts, the team also plans on staying at least 10 days to work in some of the most affected areas, a much longer crusade than normal. These efforts will be coordinated by the local pastors and missionaries with whom we have worked before in order to make sure that the aid goes directly to those most in need. Some of those same pastors and missionaries have even lost all of their own belongings but are serving others first. 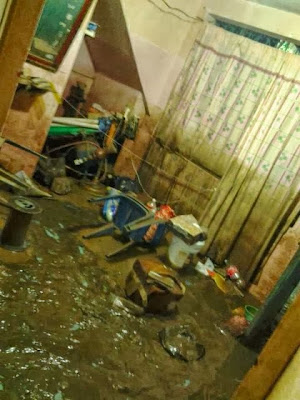 The home of one of the local pastors.

One of the local pastors and the books he has lost. 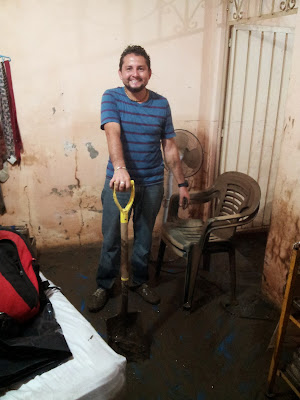 Only Jesus can put a smile like this on one's face after not only watching much of your congregation and church lose everything, but, in the process, having lost all of your own personal belongings too!

It is hard to fully explain the scope of this disaster, but, several weeks after the disaster, there are still over 500 communities that continue to be incommunicable from the rest of the state, several tunnels and sections of the toll road are destroyed and the trip to Acapulco from our house requires 8-10 hours of driving, rather than the usual 4-5 hours. 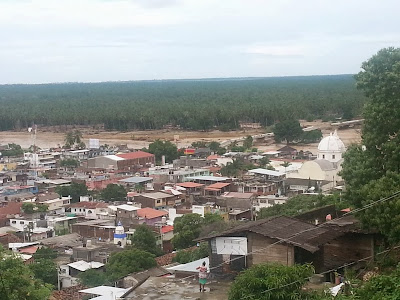 So, Victor has been spending the last 10 days doing disaster relief. 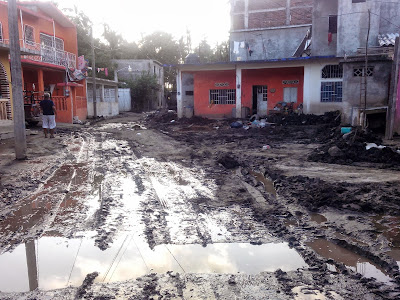 One of the streets the team drove down to get to their work site. 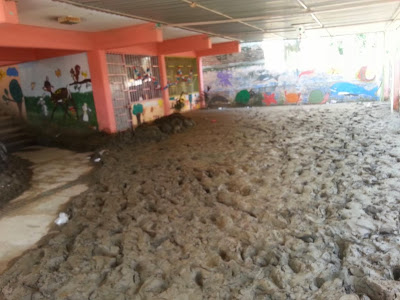 The team's first project: cleaning out 12 inches of mud from a public kindergarten so that they can use the school as their temporary medical clinic for several days of the crusade.
This is the patio of the school. 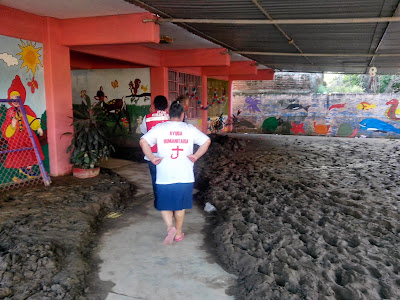 Rosa walking down a path through the muddy school patio. 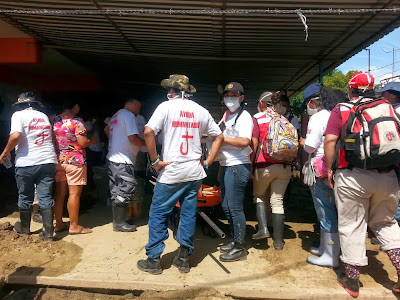 The team ready to get to work. 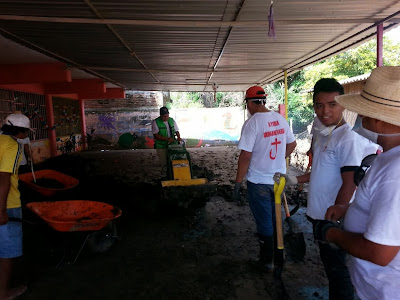 Using a special machine to scrape.... 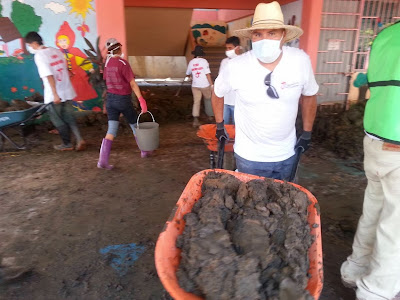 ...and then carting the mud off by the wheelbarrow and bucketful.
This is Victor with a load of mud. 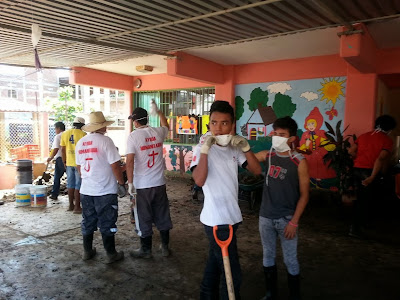 I have also spent the last ten days doing disaster relief, but here at Refuge Ranch.....relieving some of the ache of the disasters our children have survived in their short lifetimes by loving them day in and day out. (Then there is the disaster relief that one carries out during true disasters: breaking up sibling fights, holding crying children with broken hearts over Danny's loss or taking a child to the hospital after banging her foot against a door in order to make sure the toe isn't broken....like happened to Martha yesterday.)  I have also worked on disaster prevention by seeking to instill in our children the love for Christ, values and habits that they will need to prevent the disasters that they have suffered in life from happening to their own families one day when they themselves are husbands and wives, fathers and mothers.

Thank you for all you do, your prayers, your giving, your encouragement, to make these disaster relief efforts possible...both with the Evangelistic Medical Mission Crusades and at Refuge Ranch!
Posted by Fishers of Men at 6:55 AM 1 comment: