A week ago Friday night turned into a very special night in our household! Earlier this month, the youth group at church announced a Formal Dinner in July for the high school age young people. While our three eldest daughters do not normally attend youth group at church, partially due to the distance we live from the church (over one hour one way), they began to talk about the possibility of their attending this special event. As soon as the younger kids, especially five year old Ruth, heard about the Formal Dinner (Cena de Gala) they immediately started asking why they didn’t get to attend a Formal Dinner. Angie, our eldest daughter who has a special gift with children, including her younger siblings, took it upon herself to start planning a Formal Dinner just for them! What makes this event so much more special is that Angie, Diana and Martita, due to certain circumstances, will not even be able to attend their own formal dinner in July. Despite her own disappointment, Angie continued forward with her plans to make a special evening for her little siblings.

Victor and I had the honor of helping her out a bit, as well as the rest of the older kids. So, on Friday at 5 p.m., Angie opened up “Angie’s Styling Salon” and began braiding hair, doing makeup and picking out pretty dresses, lacy socks and polishing up high heeled shoes. Diana joined in with her own barbershop, taking charge of all of the little men’s hair, faces, dress clothes and shoes. Martita, Lolis and Martha became interior decorators under Victor’s guidance, while Fidel exercised his lungs and cheeks blowing up a TON of balloons. Fatima and I made a special apple desert. She and I have made several deserts lately and she is quite the cook! (In fact, when I made cookies without her….I burnt them! So, the key to success is Fatima, not me!) 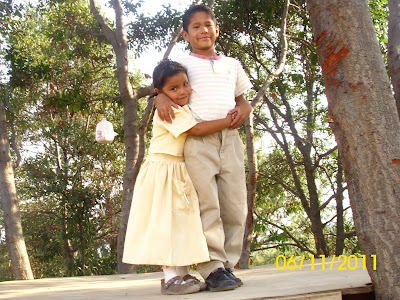 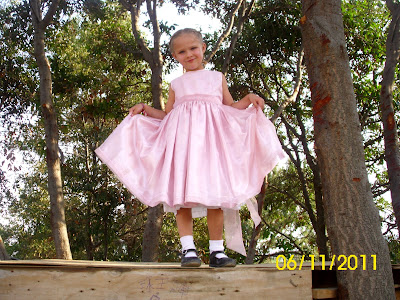 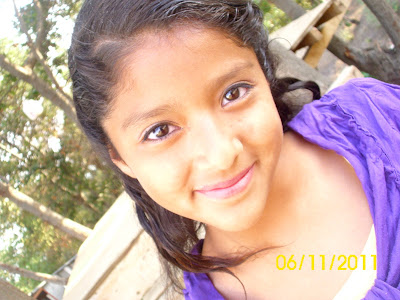 Right before 6 o’clock, Victor, Angie and I got our own “Formal Dinner attire” on and we were ready to go! 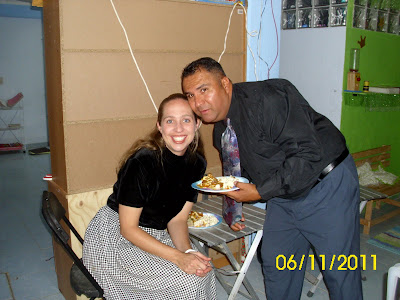 The violinist and the waiter!

I took my position as the provider of the violin dinner music and stood in the corner of the staff quarters hallway where we had set up the “dining room” for the dinner. Angie lined up the kids in age order from youngest, David, to the oldest who participated in the dinner, Josiah, and walked them up to the basement of the main house from our house. 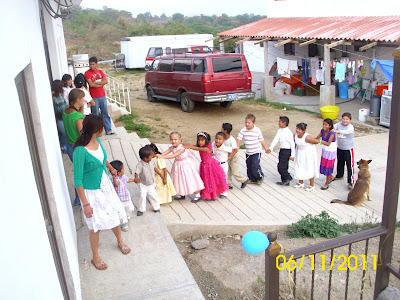 The kids, in age order from youngest to oldest, being led by Angie from our house to the basement of the main house for the Formal Dinner.

The transformation in the kids was incredible! They walked in in an orderly manner, quietly, listening to the violin music, waited to be seated, sat straight in their seats, folded their hands in their laps(!) and waited while the waiter, Victor J, served them each their plate of food lovingly prepared by Rosa (breaded chicken breast, cooked vegetables and pasta)! At our normal meals we serve the younger kids their plates of food before we pray in order to not have to take the time to serve them, cut up meat, etc. after praying. We have the hardest time keeping them from eating until we are all seated and done praying. (Quite regularly we end up blessing the food already in little David’s tummyJ) However, during the Formal Dinner two year old David didn’t even touch his food until we prayed! Fatima’s face shone so brightly we could have used her as a lamp! She said: “Mom, we could hear you playing the violin while we walked up here and we saw you standing there in the corner.” The kids conversed together so quietly and politely as they ate! 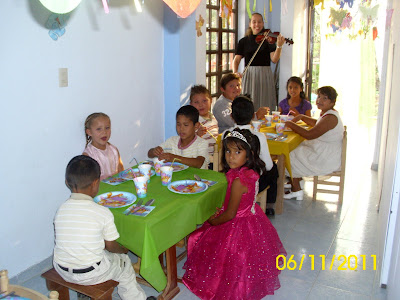 The two tables of "older" children and myself providing dinner music.

One of the highlights of the dinner for the kids was the ability to boss their dad around! Since he was the waiter, they found great delight in being able to say: “waiter” and have him bring them what they wanted or needed. 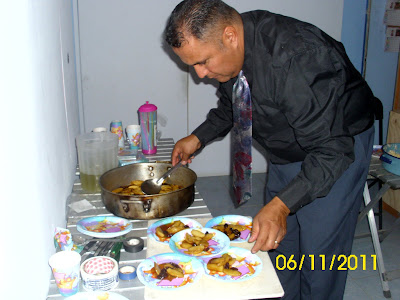 Papa, the waiter, dishing out dessert to be served.

We ended the evening with a rousing game of Bingo, playing until everybody had called Bingo! Finally, an informal raffle in which everybody won a small prize finished our time together. 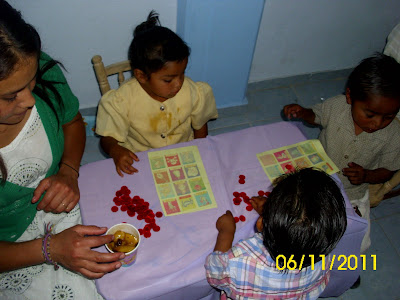 The three youngest kids playing Bingo: David (2), Daniel (3) and Ana (4). Angie was helping them and she was soooo patient! 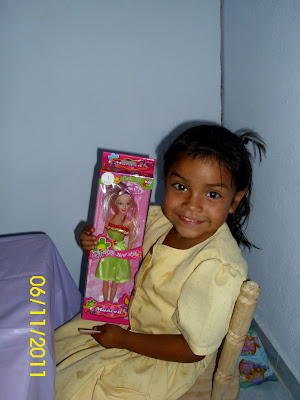 Ana and her raffle prize!

I was so proud of Angie for her great idea, her perseverance and her passion to bless her siblings this way. 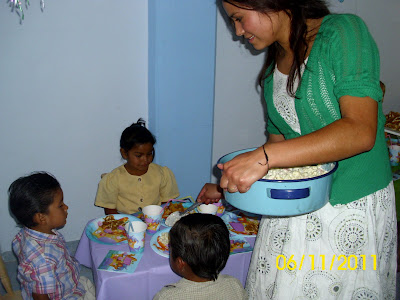 I was so proud of Victor for taking part in something so foreign to his own experience growing up in a gang, yet willing to love his kids this way; of the older kids by jumping in to help, even though there was no reward in it for them other than the satisfaction of seeing the happiness of others; of Martita for hanging around during the entire dinner and taking pictures, which goes against the grain of her personality, which prefers to be alone; of the younger kids who fully took advantage of and enjoyed this special time. Thank you, Jesus, for moments like these!

Fighting With a Shadow

We witnessed an hilarious scene earlier this week here at Refuge Ranch thanks to our youngest son, two year old David. I came out of school and he was standing on the sidewalk between the main house and our home, pointing at something on the ground and babbling away to Vero, one of our staff members. I sauntered up to observe and join in the "conversation." David was fervently pointing out a small shadow on the ground and blabbing away - obviously something in relation to the shadow. Now, mind you, it was about 1:00 p.m., so there were lots of shadows! This particular shadow was created by a tarp that is tied onto the porch roof next to our laundry area to help protect those working in that area from the sun and wind. Due to so much wind recently, the tarp has torn and one torn edge was creating a peculiar, triangular shadow on the ground, probably no more than 7 inches in diameter. Well, it was peculiar enough to totally grab David's attention, and even create some concern in him. (We will never know why!) 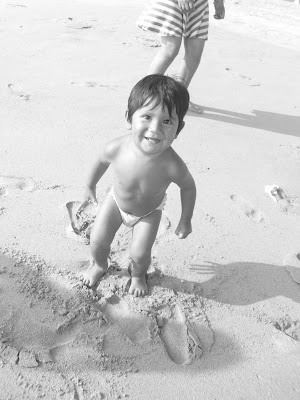 Vero and I began to "converse" with David about the shadow. This means we would ask him questions and he would give us perfectly passionate, and totally intelligible, answers! At one point, he finished babbling, turned around and walked very purposefully towards the house. I turned to Vero and said, giggling: "He knows exactly where he's going and what he's doing." Within a few seconds, he came back out of the house with a large tupperware container in his hands. He promptly walked up to the shadow and plopped that tupperware container down over the shadow. He was trying to catch the shadow!

Vero and I both just stood there with our mouths draping open! David then lifted up the container and, seeing that the shadow was still there, dumped the container on it again. This happened several times, until he just decided to keep the container over the shadow. It was, after all, the most effective way to keep that nasty shadow trapped!

He then ran up to the shadow, gathering speed as he came, and kicked that shadow with all his might, stomping and kicking repeatedly on that funky little triangle! (What made this all more fun is that the shadow was caused by the tarp, which kept blowing in the wind and moving the shadow all around!) Seeing that this strategy did not work either, little David took off again...obviously on another mission clearly known to him, but hidden to all of our understanding. So, Vero and I waited for his return. Sure enough, within a few seconds he reappeared...this time with a rock in his hand! He walked right up to that shadow and threw the rock on it! We asked him: "Did you kill it?" He babbled something back at us, picked up the tupperware container and returned it to the house. So, I guess he had declared the shadow dead.

Wow! I was amazed at this whole little adventure and witnessing David's decisiveness in trying to get rid of this shadow, in his passion to rid the world of this great evil! What enthralled me was all of the thought and energy that David was putting into...a shadow...an "object" that does not even exist! Wait a few hours and it will be gone! Stand between the real object and the source of light and you make it disappear! But, to David, this shadow was serious business and a serious problem that needed to be resolved.

The Bible talks about two kinds of figurative shadows. The first kind of figurative shadow is when the Bible teaches us, repeatedly, that our lives and this world are like a shadow in two ways. First of all, our days are fleeting, like a shadow. Wait a few hours and the shadow disappears as the sun changes position. Our lives, from an eternal perspective, last just a few hours, if not minutes or seconds!

The Bible also tells us that what we see, hear and experience now is just a shadow of things to come! I can tell you that the shadow of the tarp did not at all look like the original piece of tarp causing the shadow! The tarp is a bright blue, the shadow was a dull gray. The torn edge of the trap had frayed corners, folds and waves in it. The shadow was totally flat. I could see how the small piece of tarp was attached to the entire tarp and even tied to the house. The shadow seemed independent, small and insignificant. That is what life on earth is like! Even the marvelous creation that we see, the mountain outside my office window, is a flat, gray copy of the marvels waiting for us in heaven! We may not understand or see now, but all that happens around us and to us is part of something greater and much more significant.

The second figurative meaning of a shadow in the Bible refers to our moving and existing under the shadow of God's mighty hand, or His wings. This implies our being protected from the heat and onslaught of daily life and problems. There is still light, the problem is still there, but God's hand, His wings, take the onslaught and leave us with just a shadow of the situation.

Part of what made the experience with David so hilarious was watching him fight with a shadow! How ridiculous can that be! But, how many times do we act like David - getting all bent out of shape, consumed and absorbed by this shadow of a life that we are living! So, today, when you are tempted to go bizerks...just remember...it's not worth fighting with a shadow!

"These are a shadow of the things that were to come;
the reality, however, is found in Christ."
Colossians 2:17
Posted by Fishers of Men at 6:45 AM 1 comment: